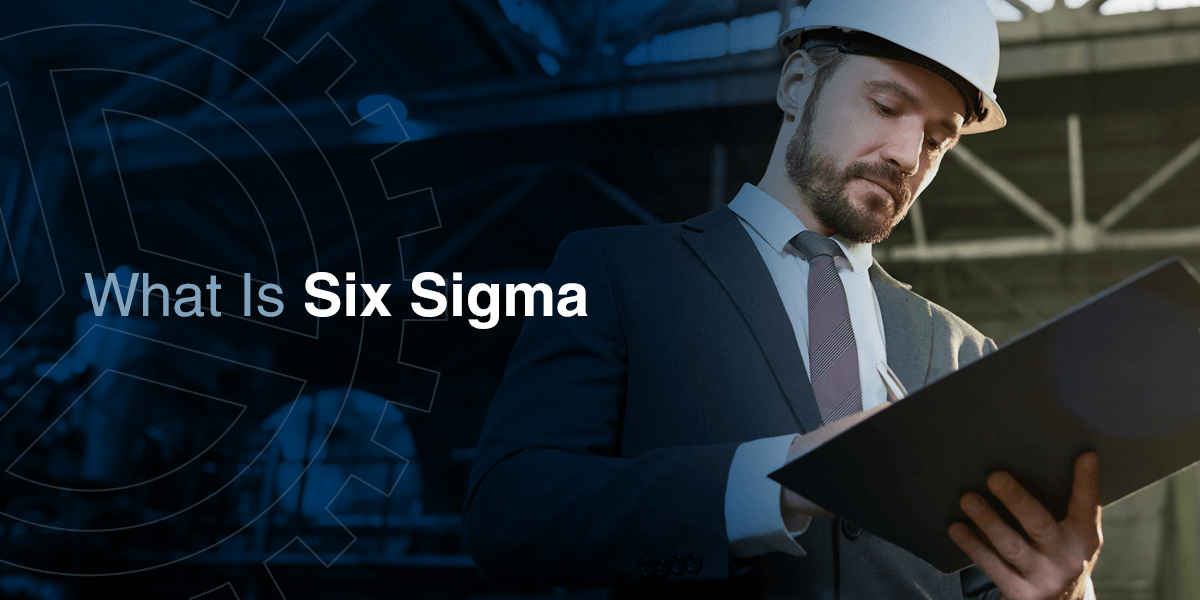 Six Sigma is one of today’s foremost process improvement methodologies. It introduces a set of standards for organizations to follow, with the ultimate goal of trimming operational waste and redundancy and therefore eliminating errors, defects and waste.

How did Six Sigma evolve to become one of the manufacturing industry’s most prominent process improvements? And does the methodology’s results match the hype?

MANTEC’s overview of Six Sigma reviews its pros, cons, certification types and implementation within the manufacturing environment. We’re establishing the foundations so you can determine which Six Sigma certification advantages your operations best — then select a partner to get you there. 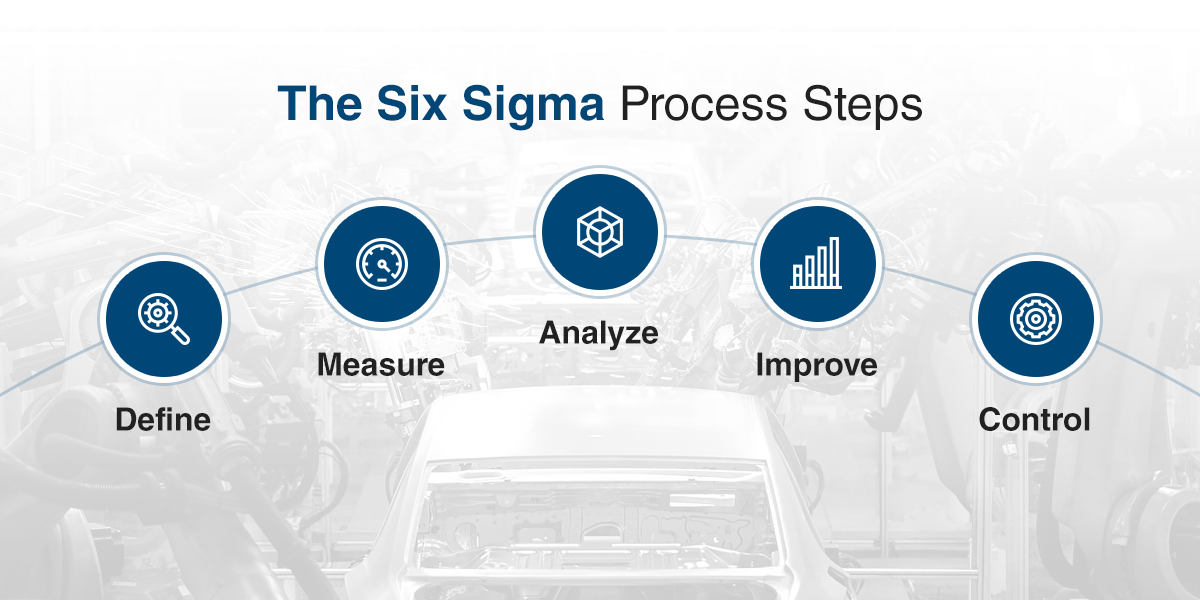 The “Define” stage seeks to identify all the pertinent information necessary to break down a project, problem or process into tangible, actionable terms. It emphasizes the concrete, grounding process improvements in actual, quantifiable and qualifiable information rather than abstract goals.

In the “Measure” phase, organizations assess where current process capabilities are. While they understand they need to make improvements and have listed those improvements concretely in the Define phase, they cannot go about tweaking and tailoring changes until they have a data-backed baseline.

In other words, the Measure phase initiates two activities:

The “Analyze” phase examines the data amassed during the Measure stage to isolate the exact root causes of process inefficiencies, defects and discrepancies. In short, it extracts meaning from your data. Insights gleaned from Analyzation begin scaffolding the tangible process improvements for your team or organization to implement.

Organizations can move beyond the Analyze phase once they’ve conducted the following:

The “Improve” initiates formal action plans meant to solve the target root problems gleaned from your Analyzations. Organizations directly address what they’ve identified as problem root causes, typically deploying a Design of Experiment plan to isolate different variables and co-factors until the true obstacle is found.

Each of these five phases creates a repeatable template to improve your business’ process capabilities. When the five stages are fully implemented, organizations can measure both the effectiveness and efficiency of critical manufacturing business processes. Measurements are tracked in a control chart, lending you quantifiable, comparable process-control data that leverage a competitive advantage.

What Are the Benefits of the Six Sigma Process? 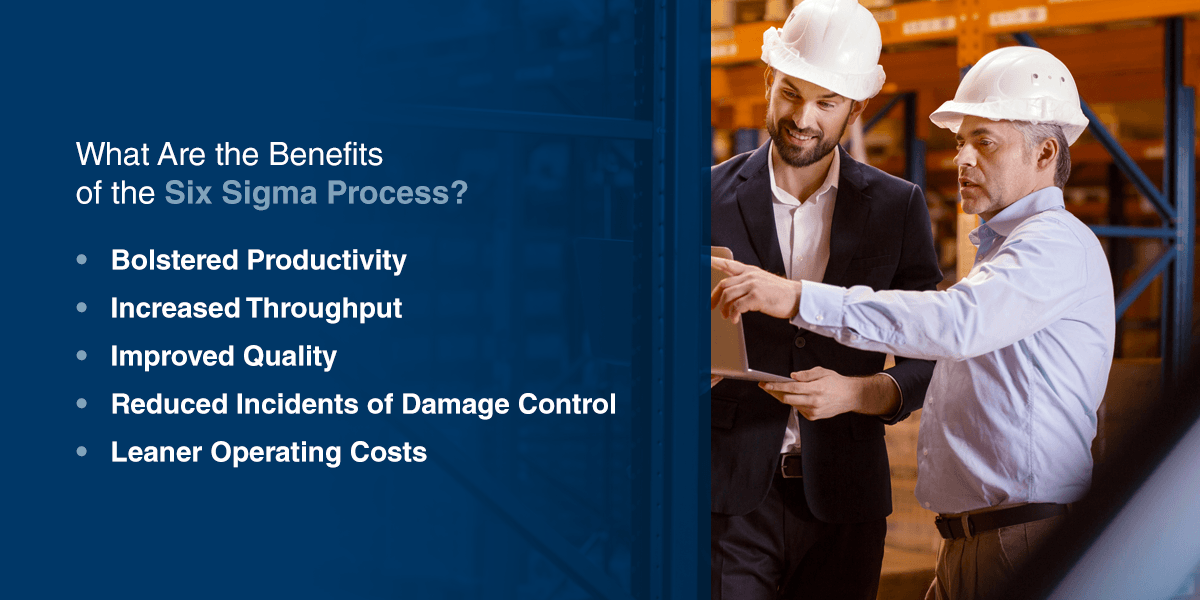 The Six Sigma methodology in the manufacturing industry carries numerous benefits, each quantifiable and backed by charted growth.

Most manufacturing environments use a few key variables to measure productivity. From input figures and output units to times to market, cost-benefit ratios and more, there’s a long list of star players on a manufacturer’s productivity benchmark roster. Nearly every industrial and manufacturing operation these days searches for ways to improve these metrics, reducing overhead or lead times without sacrificing product quality or brand reputation.

Six Sigma presents a quantifiable, actionable template to do so. Through its data measurements and analysis, organizations target bottlenecks, redundancies and error-prone processes, ultimately unlocking that Goldilocks balance between producing more in less time.

Six Sigma’s philosophy of root cause identification and elimination is the ideal complement to a manufacturer looking to improve throughput rates.

Using precise data, you target exact production areas, from processing times or inspections to unit movement, queuing and warehousing. Further domain-specific data analyses then allow you to make additional micro tweaks and changes. No more enacting new or revised workflows via trial and error. Raw materials and complete units alike move swiftly through the production cycle, with the throughput times to prove it.

Six Sigma doesn’t replace the operations and workflows you perform. It aims to improve what you’re already doing, tweaking tactical adjustments here and there to reduce mistakes and eliminate redundancies. These are inevitable in the manufacturing industry — but not irreversible. The results are a throughput process that produces end-to-end higher quality goods more consistently, without upending your infrastructure or operations.

Certified Six Sigma manufacturers have better visibility over their complete production cycle. With that knowledge comes decreased “fire drills,” — instances of major product or process defects. Six Sigma peels back the curtain on some of today’s most notorious causes of product damage in the manufacturing industry, from improperly calibrated equipment that mishandles components to complete changeover errors resulting in expensive — and cumbersome — production halts.

Managers and employees alike can focus on what they need to, with fewer ad-hoc emergencies occupying their time.

An end-to-end efficient manufacturing operation is a less costly operation. End of story. This leaves more money in the pockets of your manufacturing company, reducing overhead and direct expenses alike and burgeoning your overall bottom line.

The Challenges of Six Sigma

Like any process improvement, Six Sigma is not without its growing pains.

The guiding philosophy behind Six Sigma is the five-stage DMAIC process, which assumes every detail and activity in the manufacturing environment involves quantifiable inputs and outputs. While this isn’t misguided, it presents problems with less immediately or obviously quantifiable operations. Without proper statistical training, organizations are burdened with the task of quantifying data points seemingly in the dark.

What’s more, DMAIC is not the only approach used in Six Sigma theory. Others have fine-tuned similar but separate process improvement methodologies for manufacturers to adopt depending on operational efficiency goals.

Six Sigma relies on a diverse set of statistical tools to identify and validate a process’ root problem. Using the DMAIC model alone, teams may conduct any of the following quantitative calculation techniques:

At the very least, organizations committing to Six Sigma improvements will need a statistics or data analytics expert to guide, if not spearhead, these imperative toolsets.

Leaders in the wider organization may not have the technical fluency needed for Six Sigma buy-in and continued support. This leadership disconnect is also likely to spur misappropriated resources, with Six Sigma efforts not receiving proper time commitments, budgets, dedicated personnel and other resources needed to guide it to full process-control validation.

These challenges shouldn’t discourage your manufacturing company from researching Six Sigma consulting and training opportunities. With the proper commitment and org-wide communication, a Six Sigma methodology can be engrained into your manufacturing organization’s end-to-end workflows. 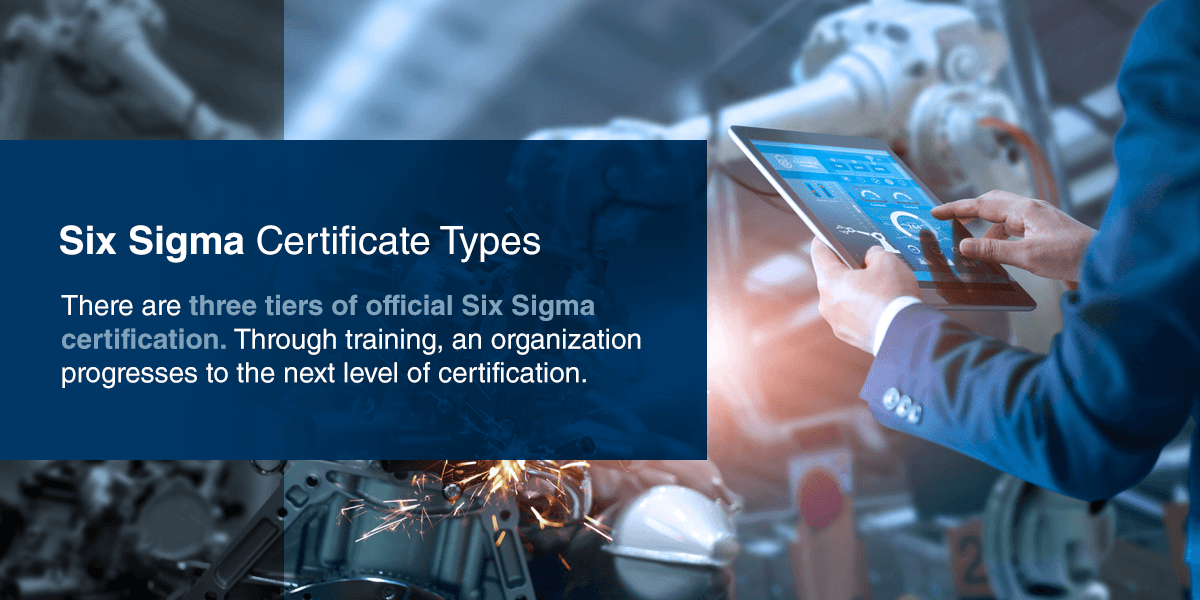 There are three tiers of official Six Sigma certification. Through training, an organization progresses to the next level of certification. Movement up the accreditation pipeline signals an organization’s proven mastery of Six Sigma concepts, as well as its ability to incorporate those concepts into daily workflows without reverting back to “old,” less efficient ways.

The History of Six Sigma

Six Sigma’s origins span nearly four decades. Across those years, its guiding tenets have always been the same – through experimentation, organizations unlock new levels of profitability and success by fine-tuning streamlined, standardized and repeatable production processes.

Those standardized processes are further complemented by robust data analysis. Systems are continually measured and analyzed to maintain efficiency and assure repetition, without old processes, activities and workflows creeping back in.

1. Which Was the First Company to Implement Six Sigma?

While variations of Six Sigma methods existed as early as the 1920s — most notably at Ford automobile plants in the 1920s and ’30s — telecommunications conglomerate Motorola was the first organization to officially create and use Six Sigma in the early 1980s. Prompted by increased rates of product defects, Motorola devised the management template as a way to implement tighter cost controls across its extensive electronics manufacturing branches.

The company also sought to investigate the standard industry assumption of the time, which accepted that reducing production budgets or cycle times would mean reducing the end quality of the product itself.

However, the success of its gamble paid off. Companies worldwide began taking note of the system, most notably General Electric (GE). In 1995, then GE CEO and business consultant Jack Welch introduced Six Sigma to the company’s quality control, manufacturing and business-management processes. This positioned GE as one of the first companies outside of Motorola to execute the Six Sigma methodology successfully into its organization, triggering further interest and adoption of this system.

2. In What Industries Is Six Sigma Most Prevalent?

Today, many Fortune 500 companies report integrating Six Sigma management methodologies into their organizations. The following manufacturing subfields, in particular, have adopted Six Sigma over the years to successful results:

Application of Six Sigma in Manufacturing 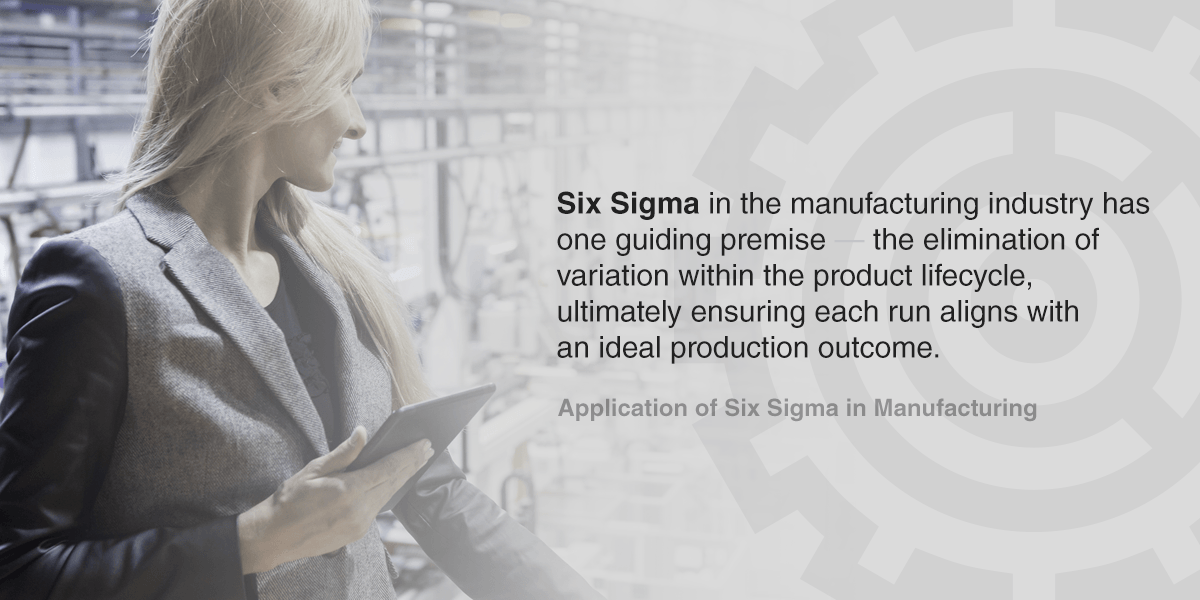 Six Sigma in the manufacturing industry has one guiding premise — the elimination of variation within the product lifecycle, ultimately ensuring each run aligns with an ideal production outcome.

This goal has distinct relevancy for those in manufacturing, including many of the following: 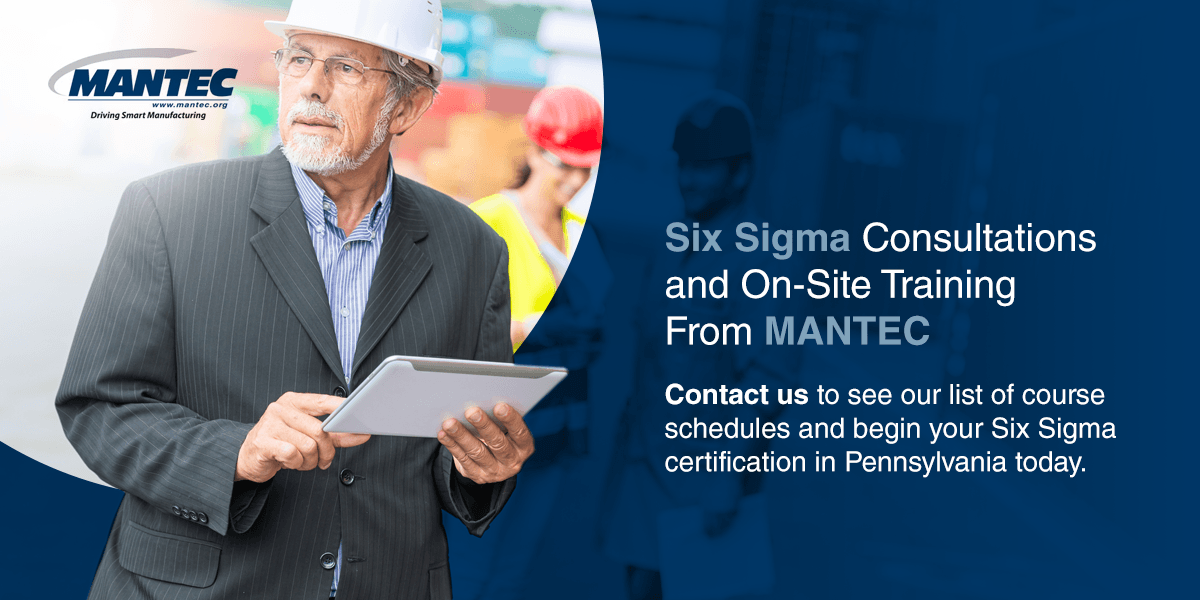 MANTEC provides a range of Six Sigma programs for Pennsylvania manufacturers, including courses in:

Each is tailored to be targeted, affordable and effective, working with your staff to earn the next level of certification. We particularly specialize in small and medium-sized manufacturing operations here in Pennsylvania, working with our regional partners to introduce process improvements, proper statistical data analysis tools and reduce waste within your walls, for your products.

Contact us to see our list of course schedules and begin your Six Sigma certification in Pennsylvania today.